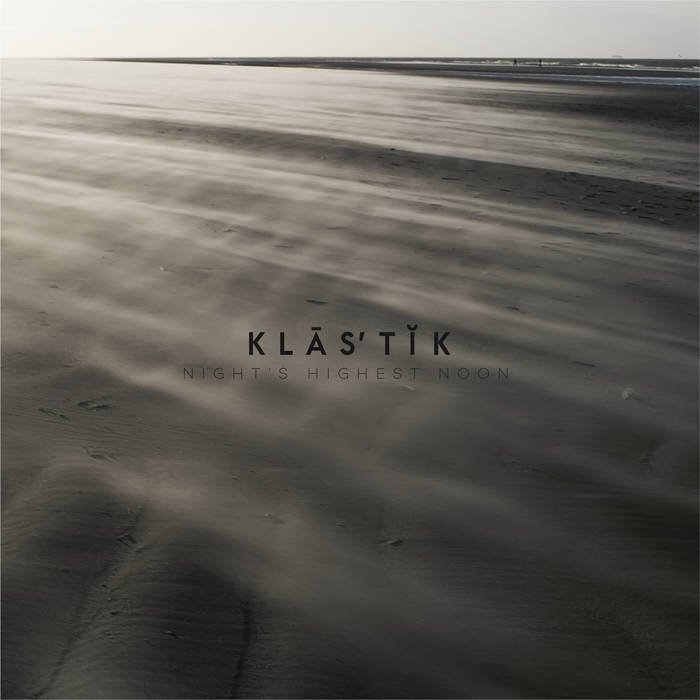 Mick Buckingham (Muttley SV) In simple English: wonderful record. Intermingling jazz with ambient drones, the music is soporific yet full of attention grabbing sonics, and stones like a one hit wounderpunch from a heavyweight boxer's glove. This in brief is one of my records of the year, no questions asked. Favorite track: Torque.

KrysaliSound is pleased to introduce the first release of the season 2018/2019 available from October, 5 in digital format and in elegant digifile packaging.
Night's Highest Noon is the debut of duo klās'tĭk based in Berlin/Warsaw. This full-length is the result of two years in studio recording where wordless vocals and drums communicate with each other looking for a new musical language. There is something ancestral in this concept that struck me immediately, something that transported me to the origin of the human being. However, on the other hand, thanks to the use of electronic elements, the architectures of these eight tracks look to the future in a perfect and complex whole.
Masaya Hijikata and Andrea Koch created a unique universe in which it is possible to feel a kaleidoscope of emotions that will hardly leave indifferent.

Introduction album by Mick Buckingham (Fluid Radio):
"There is something ingrowing, solid, and partially sepia-tinted, too, about the work of Klas'tik. "Night's Highest Noon" moves in Bosch washing machine, turned seventies tumble dryer notions of jazz and ambient. It is pivoted on a drum and drone, as opposed to drum and bass, ambient jazz suite, with an assortment of ageing honey-possessed voices, as in vocal identities made up as vocal tracks. Also, dainty percussion ditties, as in drums as ornamental phrases of layer. And carving out of soluble edifice, importantly like gasoline contained with an HGV-load of "Torque" style tunes (see track three here).​​​
Comparisons can be drawn to the likes of electronics dabblers Excepter. And in Nu Jazz territory the elasticism in percussion of Chick Corea. Psychedelic swirls pirouette as longing meets reverb heavy impending sonic objects. The aspect on "sonic" is a slow build - don't think Sonic The Hedgehog, think Tails The Snail instead. Certainly, the music benefits from being introduced to the public in the era where post-rock was twenty years its father. Collated as a continuously mixed mosaic style art piece - with the emphasis on grindstone art over dancing about sonic architecture, the music is in graceful stasis all the time. Pluck a vocal aria, you'll touch the wind with your hair stretched out straight. ​​
Because this music is magnetic. Klas'tik is an antithesis to spasm. Nothing spasticated in the most non-insulting sense of the term, and very fluid as such. Yet all the pieces of sound - take the start of second track "Airtight Decoration" - are so cogently pieced alongside one another, so ingeniously formed, that I'm really stumped as a reviewer how exactly they pulled it all off so effortlessly. "Night's Highest Noon" is a great piece of art, talking of art as "period piece", fangling off the philology to "creating peace". ​​
Whereas most jazz can be found to lack melodic integrity, the substance here: all eddying melodic loops and consonant buoyancy in instrumental fluidity, takes the free kick of Krysalisound label exposure to new research magnitude. Krysalisound should be treated as a truly just love. I enjoy the music greatly, even if the most hardened critics can only uncover meaning by burrowing into the scaly infinitude. Honestly there is so much to hear here, the amount of sheer scale is not in longitude to the doubt. ​​
Throughout the pieces, drums whip like vines, and are successful in their chiming logic. The percussion sounds dark and dapper. The gaseous intricacies of sound design underneath perfectly match the red wine march on offer - a tipsy Tiddlywinks match where drums flip to score. In any event, this release for I is getting a high mark. It might even be my experimental LP of 2018. That's high praise indeed. A bit like night's highest noon, you could say. What's your fill: a smoke or some alcohol? I'll settle for half a shandy. Bottoms up."